Have your say about the Trent-Severn and Rideau Waterways

The Trent-Severn Waterway and the Rideau Canal provides  boaters with some of the most interesting boating in Ontario. Traversing rivers and lakes, through locks, bridges, past marinas and many historical sites. Boaters say it’s one of those holidays where you learn as you explore. 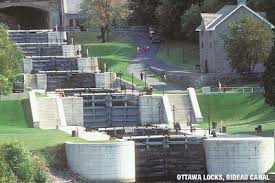 The Trent-Severn system begins in Trenton and meanders 386KM to Georgian Bay.   Only 32km of the entire trip is man-made. There are 45 locks (from conventional to hydraulic), 36 swing bridges and a marine railway at Big Chute which transports boats between the upper and lower sections of the Severn. 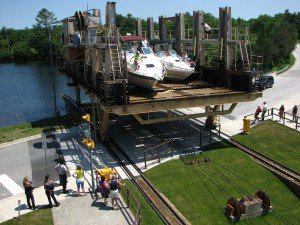 Equally spectacular, the Rideau Canal connects Ottawa to Kingston.    The 202km canal was opened in 1832 and is the oldest continuously operated canal system in North America. In 2007 it was declared a UNESCO World Heritage Site.

What makes these two routes really  interesting is the locks.    It can be a bit tricky at first  learning how to secure your boat to the canal and remembering to tighten or loosen your lines when the water runs in or out.  When you are going up the locks there can also be a bit of turbulence as  water floods in so don’t forget your fenders. 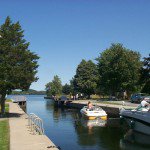 There are lots of great websites including TrentSevern.com operated by boaters and friends of the Rideau and the Trent-Severn that have great tips and information to help enhance your travels.

Do you need special boat insurance to travel through the locks?  Great question, but no.    The Trent and Rideau are included in the standard navigation area of a boat insurance policy.   The best advice I can offer is to do advance research of your route,  follow the rules and the lockmaster’s instructions, be patient when locking and always be considerate of other boaters.  Make sure to use fenders port and starboard and don’t be shy about asking for assistance or guidance.

Recently Parks Canada has made changes to their policies, services and fees along both waterways that have affected the hours of operation for the locks, maintenance crews, and locking fees, which directly affect Ontario boaters.

Terry Hodgson, editor of Canadian Yachting  is asking boaters for their input on some critical issues around these waterways.

In a recent newsletter, Hodgson states: …in order for meaningful change to be affected, the government needs to know exactly what your experience has been.  As a boater on these waterways what have the changes meant to your experience?   Have you changed your boating habits as the regulations of the waterways have gone back and forth?  What are you hearing from other boaters, cottagers, businesses along the waterways?

It is your voices that need to be heard. What is currently being done well on the Trent Severn and Rideau Canals and what would YOU like to see changed now? “

Hodgson has listed a few discussion points and is asking for boater response.   “ We would love to hear your own experiences and suggestions for making the Trent Severn and Rideau Canals vibrant and sustainable moving forward. “

Have your say on these comments or any other issues by emailing Terri Hodgson at thodgson@kerrwil.com.

It would be beneficial to boaters for Parks Canada to increase the hours of operation from Victoria Day to Thanksgiving to 9:00am – 7:00pm daily.

3.           Retailers, marinas and all other operators along the canals should be notified of Parks Canada plans for upcoming seasons in advance. This would allow operators to promote the systems in advance and notify their boaters so they have time to plan their activities.

4.           Parks Canada should bring back the advisory committees to improve communications with the operators and users of the systems.

5.           Parks Canada should consider introducing new boaters to the canals by offering some form of training on how to use the locks.