As indicated in a prior blog, spousal approval can be the most important factor in that final step towards buying the boat of your dreams. In our case, it was not a quick process.

My sailing career began at the age of 3 in B.C. during a weeklong vacation on a Thunderbird with my mother, father, 5 year old brother and a very unhappy beagle. Looking back on it, I can’t help but think that my mother was one intrepid lady. If you have ever spent a week on a Thunderbird than you know of what I speak – creature comforts are few and the quarters are pretty tight. 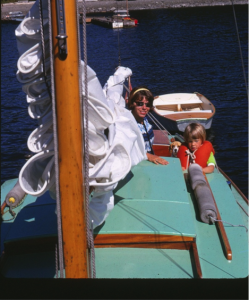 That was the beginning and also the end of pleasure sailing for me for many years to come. From racing on a Wayfarer in the Niagara River to the occasional night out on a C&C 30 in Port Dover with my father’s friend Hadley Jackson, I grew to think that sailing meant tactics, tacking, and very little comfort.

Fast forward 20 years and I found myself racing in Toronto – this time on, you guessed it, a Thunderbird where I met my husband and learned about spinnakers, race tactics, the correct method for using doughnuts to distract your competition in a downwind race and how to pee in a bucket.

Those days of racing were some of the best times of my life, but a couple of kids and a busy job quickly spelled the end to my passion for racing and before I knew it my sailing days appeared to be at and end. But then the campaign began for a new boat. At first, the boats I was shown were awesome because they had “lots of room for storing sails” or they “would be great to race on”. No, thanks. We’ve got one of those already. And then, over time, the campaign began to change. Visions of a cruising life were slowly forming – cushions, running water, a place to pee that I wouldn’t subsequently have to empty over the side of the boat and some exciting destinations that would make for some pretty fantastic summer weekends.

I admit, I made him work hard for it. 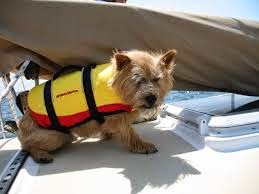 Can we afford it? “Look, I found the perfect boat and it is a great deal. Let’s drive to Cleveland in the middle of the ice storm so you can see what I mean”.

Will the kids like it? “We’ll take them places with swimming pools and great food, and if worst comes to worst we can plug them in with video games while we sit under the stars and drink wine”.

What about the dog? “We’ll get her a life jacket and bring her along”.

Can I have cushions? “You can have as many cushions as you want”.

The vision became clear. I could see how a boat would fit into our family like and enrich it in many ways. We are still waiting to get the boat into the club, but our first adventure is already planned – a day game of the Blue Jays and a night spend at Island Yacht Club. Sounds like a great way to confirm that we have made the right decision – and are officially cruisers. 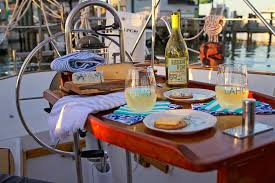