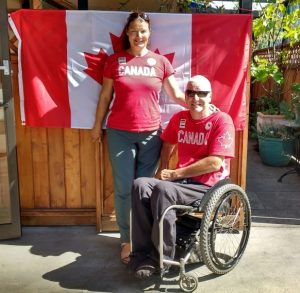 On Saturday night, John McRoberts and Jackie Gay of Royal Victoria Yacht Club were honoured with the most prestigious National sailing award of the year at the Carlu in Toronto, Ontario.

The SKUD team were recognized for their outstanding achievements at the 2016 Rio Paralympic Games. John and Jackie captured the silver medal in the highly competitive 2-person mixed keelboat fleet, transforming Canada into the second most successful Paralympic sailing nation in the world.

As partners in sailing and life, McRoberts and Gay had to overcome many obstacles to get to the podium including a significant injury sustained by Jackie just days before Paralympic competition.

“Persistence pays off!” exclaims Jackie Gay. “We’ve faced many challenges quite similar to this and came out stronger. It gave us the confidence to know that we could overcome anything.”

John’s sailing experience undoubtedly contributed to the couple’s success in Rio as John has competed in four Paralympic Games. John won silver steering the crew boat at the 1996 Atlanta Games when Paralympic sailing was a demonstration sport, he captured bronze at the 2008 Beijing Games navigating the SKUD 18, and he finished fourth in London four years ago.

“If I were writing a book of my career, this would be the perfect ending, winning the Rolex Sailor of the Year beside my wife Jackie Gay. Sometimes it feels like Rio was a dream but tonight brings it all to life. I feel truly honoured!”

John and Jackie were presented with exquisite Oyster Perpetual Yacht-Master watches courtesy of our generous partners from Rolex Canada.

Discover why boaters have trusted Skippers’ Plan
with their boat insurance for over 70 years!
Get an online quote today!